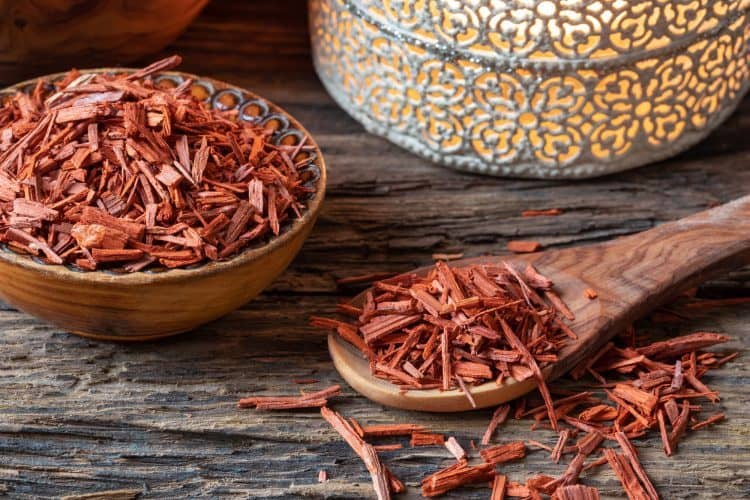 Sandalwood is the story of how the fragrant bark from India’s Santalum trees enchanted the world. It’s been used for thousands of years in both Hindu and Buddist religious rituals. Now that we know a little more about it, we’re going to process the question ‘What does sandalwood smell like?’.

In the West, sandalwood is frequently used as a home fragrance or as a base in perfumes. It has a warm relaxing quality that explains its immense popularity, but what exactly is the scent of the enchanted?

While sandalwood is obviously a wood, it’s often put in a category of its own due to its unique characteristics. It smells distinctly exotic, sweet, creamy, smooth, and warm all at once. It’s a precious-wood scent that is instantly recognizable once you know what sandalwood smells like.

Sandalwood adds nuance, warmth, and complexity and is often paired with woody fragrances like rosewood, or cedar or other essential oils like patchouli, vetiver, and vanilla.

It is a key ingredient in the so-called floriental or floral-amber fragrance families when combined with white florals like orange blossom, jasmine, ylang-ylang, magnolia, gardenia or tuberose.

But the reason sandalwood has become a mainstay in many men’s (and an increasing number of women’s) fragrances is that it works as an excellent base for many other scents.

It’s long-lasting and softly woody base for fragrances in the oriental, woody, fougere and chypre families. In floral and citrus fragrances, sandalwood is often used as a fixative to improve the longevity of their more volatile oils.

Where Does Sandalwood Come From?

Sandalwood originated from the Santalum album tree of Southern India. It’s an extremely slow-growing tree that has to be at least 15 years old before it’s considered eligible to harvest.

Sandalwood is the second most expensive wood in the world (after African blackwood). Because of this, the trees are not cut at the ground like most woods but pulled down to their roots and processed to maximize profit.

Sandalwood has been so heavily harvested in India, it is currently considered a threatened species. Unfortunately, even though sandalwood harvests are now largely controlled by the government, there are still problems with illegal harvesting.

While Indian sandalwood is still considered the highest quality and best smelling, most of the sandalwood you see on the market now comes from Indonesia, Nepal, Bangladesh, Pakistan, Hawaii, and Australia.

More recently a synthetic chemical fragrance Isobornyl cyclohexanol is used as an alternative to the natural product.

What Are the Benefits of Sandalwood?

Sandalwood has long been seen as having unique benefits both to mental and physical health. Ayurvedic and traditional Chinese medicine both use sandalwood oil to treat a wide range of ailments.

Beyond sandalwood’s use in perfumes, it has astringent, antiseptic, and skin-softening properties making it popular in many bathroom toiletries. Recent studies also indicate it may increase mental alertness and decrease anxiety.

Sandalwood fragrances are often described as warm and cozy which makes them perfect for winter and colder weather. While it’s more commonly used in men’s colognes, it’s actually a unisex-friendly scent that works well for men and women.

Tam Dao is a woody unisex masterpiece. Inspired by the landscape of Tonkin, this fragrance blends strong notes of sandalwood and cedar with brighter notes of Italian cypress and myrtle layered with white musk and spice. It’s a familiar, comforting scent that is versatile and works well for most occasions.

Samara considered one of the first woody perfumes for women and has become an iconic fragrance. The perfumer Jean-Paul Guerlain was inspired by his travels in India to craft a perfume with the purest sandalwood and jasmine fragrance. Despite the intense opening, the dry down is soft, powdery woody perfection. A beautiful, comforting and serene scent.

If you’re interested in a bolder take on sandalwood, Creed’s Original Santal is a spicy fragrance with strong notes of ginger, cinnamon, and coriander balanced with sweet vanilla and lavender. Deep, rich and masculine, it’s a great cold-weather fragrance. Also a compliment-getter.

Generally, sandalwood is blended with other wood or floral notes. However, Serge Lutens’s bold departure to combine it with cacao and damask rose paid off. This is a luxurious unisex trifecta of chocolate, sandalwood, and rose. The perfect perfume for a romantic winter night.