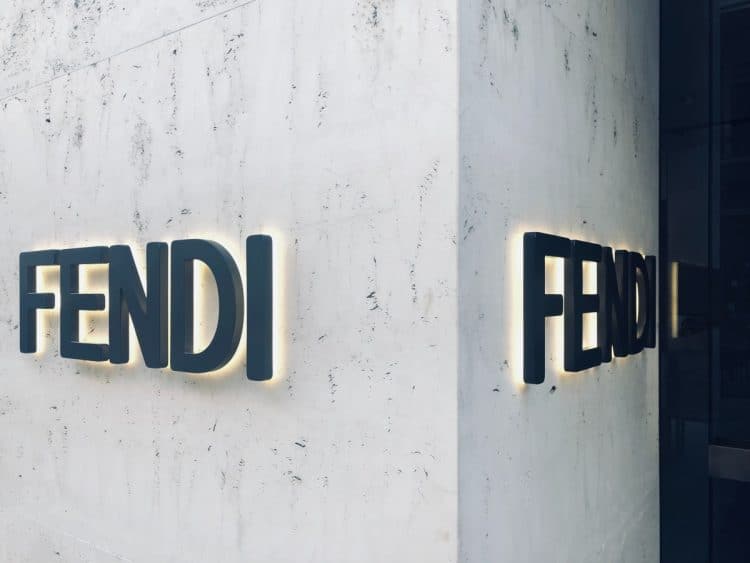 Fendi exploded into the fashion world during the 1920s and remains a testament to “elegance, craftsmanship, innovation and style” today. Though Fendi is best known for fashion and accessories, the company made a name in the perfume world with a line of luxurious fragrances.

Most fashion fans know Fendi by the signature “Double F” logo. The brand introduced the new Fendi logo in 1965. Since then, the iconic “Double F” graces everything from the designer handbags (like the iconic baguette bag) to the perfume and Fendi cologne products.

Italian Adele Casagrande founded an Italian-based fashion house in 1918. Following her marriage to Edoardo Fendi in 1925, she changed the company name to Fendi.

Though originally focused on fur and leather products, Adele’s daughters expanded the business with new product ideas and the addition of an exciting Parisian designer, Karl Lagerfeld.

The Fendi daughters steered the fashion house toward the path of innovation the company remains known for today. First, expansion to a ready-to-wear line, then the chic logo, and ultimately perfume, Fendi is a veritable staple of creativity and cutting-edge fashion.

The LVMH Group acquired Fendi in 2000 and became the company’s majority shareholder the following year. A member of the Fendi family remains closely tied to the company’s product lines since Silvia Venturini Fendi stepped into the role of Creative Director in 2019.

Through the years, Fendi collaborated with several perfumers, including Christine Nagel and Delphine Lebeau, to produce signature scents.

With more than two dozen Fendi fragrances, there is some variety in terms of scent. The most popular Fendi perfumes trend toward fruity-floral combinations, while the Fendi colognes for men gravitate toward woodsy scents.

Fan Di Fendi Women is a fan favorite for women because its versatile enough for day wear but sexy enough for a night out. The subtle leather notes even out the fruity citrus tones of tangerine and black currant with a light rose and jasmine touch.

For summer wear, Fendi’s Fan Di Fendi Eau Fraiche perfume delivers a symphony of soft floral notes laced with lemon and green tea. The effect is as subtle as it is refreshing.

Fendi packaging can only be described as crisp, clean, and utterly iconic. Since the very first Fendi perfume graced shelves in a chic, minimalist spray bottle with the company name boldly emblazoned on the front, each subsequent scent followed suit.

Modern bottles and boxes retained much of the original Fendi style, often in variations of gold and black. Some designers branched out with red hues and unique bottle shapes, but most stood by the traditional feel of Fendi.

When Fendi entered the world of teen perfume in 2011, the bottle captured a variation of the signature “double F” logo but stayed true to the traditional gold and black colors. Despite the new, youthful scent notes, Fendi remained true to classic design elements.

As an Italian fashion house, Fendi exudes luxury and glamour with chic, modern undertones. Though Fendi embraces tradition and its fashion roots, the designers, include their fragrance teams, deliver subtle, richness.

Fendi fragrances for women embody femininity laced with power and glamour. Since the original Fendi for Women, the fruity-floral perfumes remain a popular option for women around the world.

The Fan di Fendi line delivers an array of fresh fragrances that tend to blend florals and fruits in clean scents. It’s possible to select a different Fendi perfume for every season.

Fan di Fendi is ideal for shuffling through autumn leaves. It doesn’t fight the scents of fall, like nutmeg and cloves, but leaves you with a long-lasting subtle scent.

On the other hand, heading into spring and summer, drawing on the citrusy scents of L’Acquarossa by Fendi, you will appreciate the soft hints all day without overpowering a room.

Fendi perfumes, like the other company lines, stand the test of time. Expect to notice any Fendi fragrance throughout the day and into your evening activities. Since the perfumes have subtle but noticeable scents, they don’t fade much.

However, if you perspire a lot during the day or spend time around overpowering scents (say a restaurant), you may need an additional spritz of your favorite Fendi perfume.

One thing about Fendi’s perfume is that there is something for everybody. When Fendi discontinued the original line and reintroduced the Fan di Fendi selections, they opened the door to a wide range of products.

As noted, Fan di Fendi appeared in Teen Vogue with a fresh, youthful take for younger fans. On the other hand, they followed that appearance with a 2014 fragrance made for seduction. Furiosa by Fendi caters to an older crowd of women who own their power.

Though it’s not easy to replicate a proprietary blend, especially when a company discontinues your favorite perfume, fans of Fendi for Women may like YSL Opium or Magie Noire by Lancome.

If you prefer the modern scents, like Furiosa by Fendi, try White Amber No. 541 by Gap or Creed’s Fleurissimo.

Nobody manages to quite mimic any of the Fendi scents, though some try. Fendi’s perfumes and colognes remain in a league of their own, so if you struggle to find (or afford) the real deal, look for sample sizes or discounts on discontinued scents.

Speaking of cost, it’s important to mention the Fendi perfume price. Given the cost of their clothes and accessories, it’s easy to believe the perfume would follow suit. Depending on the perfume you choose, expect to pay a fair price compared to similar products.

One ounce of Fan di Fendi for Women can cost upwards of $60, though you can find a 0.3 ounce mini for a fraction of that. On the other hand, Fendi’s Furiosa Eau De Parfum Spray costs around $70 for 3.3 ounces.

Where Can I Buy Fendi Perfume?

If you desperately want one of the original Fendi fragrances, you may have some trouble tracking them down. Since many fans lament the loss of Fendi for Women and others from that original set, it’s difficult (and costly) to find them. Try auction sites, estate sales, or even local thrift stores.

Even though Fendi is an Italian fashion house, you can find Fendi fragrances at some online fragrance stores like The Aromi, and major retailers also including Amazon. You can even find Fendi perfume, including Fan di Fendi and Furiosa by Fendi at Walmart.

Don’t discount the minis if you want to sample the goods before investing. Of course, if you can’t swing a true Fendi perfume, you can always find a budget-friendly alternative that still hits all the right notes for you.