There aren’t that many fragrance companies that can celebrate 150 years in the biz. But then Penhaligon’s isn’t just any brand. It has come to represent the best of British heritage since it was founded in 1870 by William Penhaligon.

What started out as a barbershop has evolved into a Puig-owned company [the Spanish firm that owns L’Artisan Parfumeur, Carolina Herrera and Comme des GarÃ§ons Parfums, among others) that niftily balances tradition and modernity, with two royal warrants along the way.

The company’s debut fragrance, the woody-floral Hammam Bouquet, was launched in 1872 and remains a best-seller to this day.

As you can imagine, we had a really hard time narrowing this list down to just 10 best Penhaligon’s fragrances. But we hope that it will give you a good idea of the top-notch quality and creativity on offer.

You will notice that many of the fragrances on this list are recent releases. Proof that Penhaligon’s is not just trading on its illustrious heritage.

We begin our list with this absolute classic. Originally launched in 1902, it was created for the Duke of Marlborough, according to the brand’s website, and has lost none of its charm over the decades.

Interestingly, on a technical level, it has no heart notes. But it’s the super-refined opening of lemon, lime and lavender notes that keeps us coming back for more. That, and the dry down of pine, musk and black pepper notes.

It’s officially a male fragrance, but we know better than to be limited by such things, especially in spring and summer when it’s the ideal tonic for the heat.

There’s no shortage of quality oud fragrances on the market, but it’s this best-seller that always gets our attention.

Inspired by the Turkish town of Halfeti, this 2015 release has a very brief fresh opening, courtesy of grapefruit, green and artemisia notes.

It then moves rapidly into more heady territory when the notes of cumin, nutmeg, rose and saffron come into play.

Oud is the centerpiece of the fragrance and is very ably assisted by notes of leather, amber, vanilla, Tonka, and sandalwood.

This EDP is rich, warm and intense in all the right ways.

Launched in 2011, Penhaligon’s Juniper Sling is inspired by the quality of London dry gin.

Juniper berries, which give gin its distinctive style, open this unisex EDT in style. But there’s more to this modern boozy classic than its gin intro.

A cocktail of citrus (orange), spices (black pepper and cardamom), herbs (angelica) and a hint of sugar all complement each other.

It’s more of a skin scent, so if you only go for power performers, this one might not be for you. But you will be missing out on a fragrance that develops beautifully on the skin.

A humorous take on the idea of the fragrance family, the Penhaligon’s Portraits collection was launched in 2016. It includes an assortment of EDPs named after delightful characters, including Clandestine Clara, Heartless Helen, and The Bewitching Yasmine.

We love this 2017 release for its big, bold and powdery rose opening, with spicy pink pepper in the background.

We don’t pick up much of the listed vetiver, but all is forgiven when the dynamic between the rose and Laotian oud (one of the best varieties) is so gorgeous. Sandalwood adds to the delicious oriental mood.

It’s on the pricey side, but the exquisite packaging is part of the deal.

Inspired by the Tudor rose and the union of the houses of York and Lancaster, this 2018 release is one of the most distinctive rose fragrances we’ve smelled in a long time.

Its unusual character is evident right from the nutty opening notes of hazelnut leaf and almond oil. Cinnamon adds to the warmth.

The queen of florals dominates the heart of the scent, in particular rose centifolia oil and rose absolute. Their fruity potency is accentuated by red lily.

Eventually settling on a base of woody, musk and vetiver notes, it’s powerful stuff, so one or two sprays will more than do.

Looking for a super-elegant iris fragrance created by one of the world’s top perfumers? Then this 2013 release is for you.

It begins in fresh ‘n spicy mode with notes of bergamot and pink pepper, and then transitions to the star of the show. This iris is full of powderiness and is partnered with a dose of jasmine, which has a slight animalic quality.

That animalic vibe is further developed in the drydown where an oh-so-smooth leather note predominates. Its creaminess is enhanced by woody notes of sandalwood and vetiver.

Penhaligon’s Endymion Cologne is a classic. It opens with freshly elegant notes of bergamot and lavender, which give it a captivating herbal-citrus character at first.

This 2016 release then takes a floral direction with the addition of a geranium note, which builds on the initial freshness. A waft of coffee brings an intriguing twist and contrast to the proceedings.

A soft suede mood permeates the EDP and reinforces its timeless appeal.

It’s too good to be monopolized by men only.

Wow! That’s our response every time we wear this multi-faceted 2014 release. We’re sure you will feel the same way when you sniff it out.

It’s from the brand’s Trade Routes Collection, which is inspired by all the exotic ingredients that arrived in London at the end of the 19th century. And boy, does this deliver on the unusual front!

Aromatic juniper berries set the tone in the opening, but there are also accents of grapefruit, cardamom, red berries, and fig leaf to tease the imagination.

Notes of fig milk, black tea, and lavender stand out in the heart of the EDT.

The olfactory pleasure keeps on coming in the dry down that features a perfect union of vanilla, ambergris and woody notes.

This 2015 release is another treasure from the brand’s Trade Routes Collection. Taking its inspiration from the abundance of opulent goods to be found in a souk (Arabian bazaar), it’s a beautifully executed woody EDP.

Opening notes of saffron, artemisia, and absinthe create a rich and heady ambiance.

The intensity progresses to the heart of the fragrance, featuring a melange of floral and spice notes, in particular rose, carnation, cardamom, and cloves.

There’s a lot going on in the complex dry down, but there’s no mistaking the contribution of oud, myrrh, sandalwood and amber to the overall sensuality.

After all that full-on opulence, we complete our round-up with the understated luxury of this 2002 release.

A softly sweet note of nectarine sets the tone, with a touch of greenery in the background.

Violet infuses the heart of the fragrance with a delectable powderiness, while notes of jasmine tea and lily-of-the-valley provide floral and green nuances respectively.

An almost caramel-y vanilla (without being gourmand-ish) is complemented by a large dose of seductive musk and creamy sandalwood in the dry down. 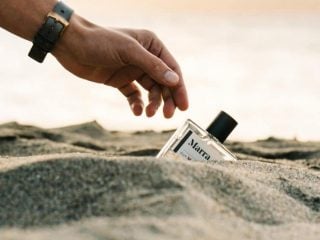